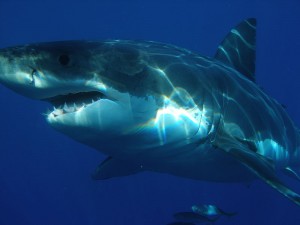 The great white shark (Carcharodon Carcharias) is a powerful predator that inspires fear; it grows to over 6m long and weighs over 2 tonnes. It is the largest of the predatory sharks. People think of this shark is a blood thirsty monster out to kill all people, but attacks on people are rare and it occurs when the shark mistakes the person as a seal  from underwater you can see the similarities between what a seal may look like and a surfer on a board. 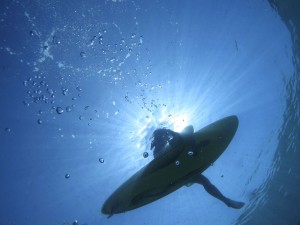 To date the Great White has been responsible for around 65 deaths worldwide since 1876. With 242 recorded non fatal attacks worldwide. 65 deaths. Think about this for a second. How many people die each day in car accidents? Or from gang incidents? How about from drunk drivers? A lot more! So why is the Great White so feared?
Great whites are very curious and most “attacks” appear to be motivated by curiosity rather than a desire to feed and most attacks on humans are not fatal. Ironically, the great white is far more threatened by humans than we are of them. Around 100 MILLION sharks are killed every year. These sharks are killed not for meat but their fins. Shark fin soup is an oriental delicacy. The price for fins is high, which is why so many sharks are culled, and then thrown alive back into the ocean to die.

Great whites inhabit waters along the coasts of the Americas, North/South Africa, Korea, Australia, New Zealand and around the mid-pacific and Atlantic oceans. They are often seen near seal colonies.
sharks generally locate near the surface or at the bottom from 16-32 metres deep, the average is around 20 metres, due to their preferred habitat there population is becoming effected by coastal habitat degradation, this is heightened by that much of the species habitat is in areas with dense human populations, beach meshing, is put in place in areas of the sharks habitats, this threatens to reduce population numbers, and the sharks that get caught tend to be around 1-3 metres, which suggests these meshes are being placed close to pupping grounds which is a huge problem as sharks don’t tend to breed often. 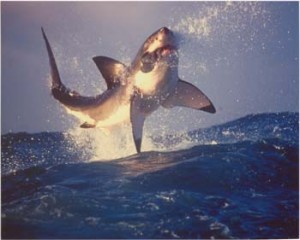 Population Density
From looking at the statistics of sharks being caught in beach netting, game fishing and commercial captures, it shows that there is a progressive decline in the population of great white sharks, it is believed that the population has decreased by 20% over the last 3 generations and in some areas such as Korea the number is substantially lower due to the commercial fishing, although in comparison to other shark species and especially when compared to most other fish species the decline doesn’t seem great, but over a large amount of time, it will get worse and worse due to the low reproductive rate.

Pregnant females are rarely reported thus little is known about the reproductive rate and behaviour of the species. Great whites do not reproduce until they reach around 4.5-5.0 metres in length and have a small litter of around 2-10 pups, it is believed that they do not reproduce every year and their gestation time is longer than 12 months.

The great white is an apex predator and so it plays an important role in the marine ecosystem; keeping the population of their prey in check and aiding the maintenance of genetic fitness of its prey. Its difficult to predict accurately what a continued decrease in great whites would do to the ecosystem, it could dramatically change the balance of the seas ecosystem as seal populations would increase dramatically and thus the fish they feed on shall eventually become extinct and then that will extinct the seals.

Great whites do not reproduce until they reach around 4.5-5.0 metres in length and have a small litter of around 2-10 pups, it is believed that they do not reproduce every year and their gestation time is longer than 12 months.

Age
The age of a shark is determined by counting the growth rings formed on the vertebra. The vertebral rings are laid down on a yearly basis. Vertebrae from the backbone of the shark are prepared for ageing by embedding and sectioning them.  Several vertebrae from the cervical region are first removed from the animal and all the surrounding tissue (muscle, etc) cut away from the centra. The cut is made perpendicular to both the centrum face and the haemal arch.

The factors that enable the great white shark to be the apex predator at the top of the food chain are;
Gene pool: The strongest, fastest, healthiest shark will be the one that females will want to mate with, thus the weaker ones shall not get the chance to breed and that particular sharks genetic information will not be passed on.
Climate change: During times were the ocean temperatures change suddenly (El Nino) the sharks that have the ability to either adapt or migrate elsewhere are the ones that shall survive, but the weaker and less smart sharks shall die
Ability to find food Sharks can go for a long period of time without food during times of scarcity, the weaker sharks :will not last this long period as there body cannot handle the 100’s of miles needed to travel to locate the food sources.
Colouring: A great whites colouring makes it difficult to see in the water, so it’s able to sneak up upon its victims, the sharks white undersides blend in with a bright sky’s reflection at the water surface.